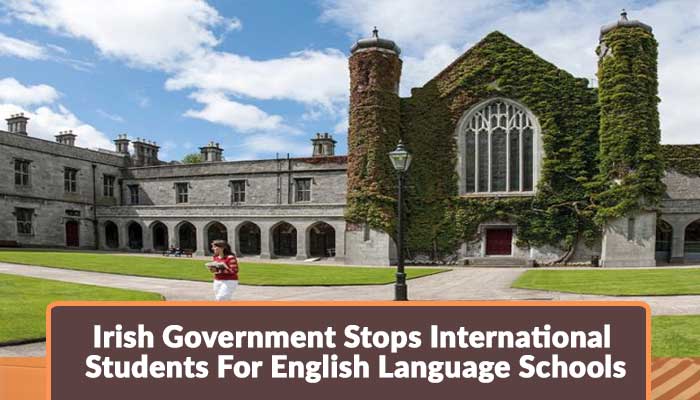 The government of Ireland had ordered the English language schools to halt enrolling international students until the 2021 academic session for study in Ireland under the concerns of students’ safety. For this purpose, the language school representative groups have received a three-page letter from The Department of Further and Higher Education, Research, Innovation, and Science. However, it has seen through the media reports that the department would welcome the voluntary moratorium under which the schools will stop international students’ enrollment.

To ensure this decision, the department has sent a letter in August to several English Language Education schools or universities in Ireland in which the Progressive College Network, Marketing English in Ireland, and Independent Language Schools Group are included.

What Are The Reasons Behind This Decision

The department has said that it is still unclear whether the education sector will be able to manage the safety of the international students in Ireland or not.

The government has addressed the schools that if they can manage the proper accommodation for those who need to stay in quarantine at once then the can come to Ireland. But, the situation will be worse if those students will become dependent upon the state for help in case of no accommodation availability.

During the lockdown, these English language schools tried to manage the online classes to continue their study programs. But, the department has also received a lot of complaints regarding the quality concerns while regulating the online classes by these schools.

The concerned departments have responded against the letter sent by the Irish government. The Ireland ELT industry has remarked against this decision that it is “universal disappointment and frustration”. They said that there have been a number of issues identified that require the clarification and only then the moratorium will be feasible.

However, in concerns about accommodation in Ireland, the industry has revealed that they are confident to offer proper accommodation to international students. They added that there is no legal requirement for the students to stay in the university accommodation during their studies in the English language schools. Moreover, students with a long term student visa for Ireland prefer off-campus accommodation that is sourced on their own.

In the case of online teaching methods, the associations have cleared that it would take some time and expertise to develop an online teaching system that would be enormous.

The chairman of PCN, David Russell explained that the online provision is very high from the students’ side. It has been taken from the students’ survey for online classes, he said. He further explained that they have been taking more surveys from students regarding the online education system. The last was taken in July that was almost a positive survey.

He said that the government mentioned the examples of the cited with the poor online provision in the letter. But, the government cannot represent the whole sector with such an issue.